My Miss Four will become Miss Five in a couple of weeks, and it is her turn to have a party this year (her big sister celebrates her birthday in the following month, so we alternate birthday parties in the interest of fairness...and laziness!).

Miss (almost) Five really wanted a Fairy party, but as most of her closest friends are boys, we decided against that theme (fortuitously, the mermaid invitation she received last week was for a party at the Fairy shop to be held the day before her birthday, so she'll get to do the fairy thing anyway).  I was a bit stuck for an alternative theme that would suit both genders.  However, when the birthday girl told me she wanted a butterfly cake, inspiration struck me - a Bug/Creepy Crawly party!  I've already managed to come up with a heap of ideas, and the theme really suits both the boys (spiders, snakes, worms, etc) and the girls (butterflies, ladybugs, etc.).  Unfortunately, her birthday is in the middle of winter, so we will most likely be confined indoors.  For this reason, we have decided to have it at home, and keep it managebly small (as she is turning five, she has chosen five friends to invite - their parents and siblings are also invited).

I searched the web (pardon the pun) for some bug themed invitation ideas and was inspired to make these Ladybug Invitations: 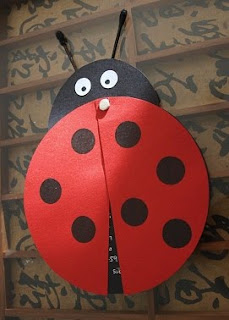 They were really simple (and fun) to make.  I used a saucer to cut circles out of red and black card stock for the body.  To make the head, I used a cup to cut a smaller semi-circle shape out of black card. 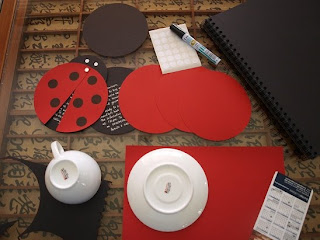 I then stuck the head onto the back of the black circle.  For the ladybug's wings, I simply cut the red circle in half and drew black dots on randomly with a black permanent marker.  The kids had a template that I used to make a nice neat circle (black dot stickers would have worked well too, if I had some). 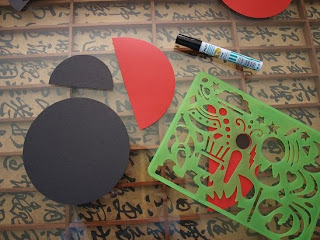 To attach the wings to the body, I punched a small hole through the slightly overlapped wings and the black circle and inserted a split pin through the hole.  This allows the wings to move up and out of the way so the party details can be read underneath.  I gave the ladybug some white sticker dot eyes and glued a strip of magnet to the back (I cut up an old calendar fridge magnet for this).  I also coloured in some cotton buds with black permanent marker, trimmed them to size and glued them to the back for antennae.

Finally, I used a silver pen to write the invitation wording:

Sorry to bug you,
But we're excited -
(Child's Name)'s turning five
And you're invited! 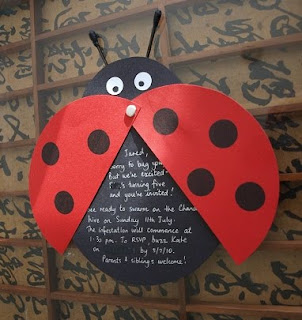 Stay tuned for more bug-inspired party goodies over the next couple of weeks!
Posted by Kate at 6:10 PM